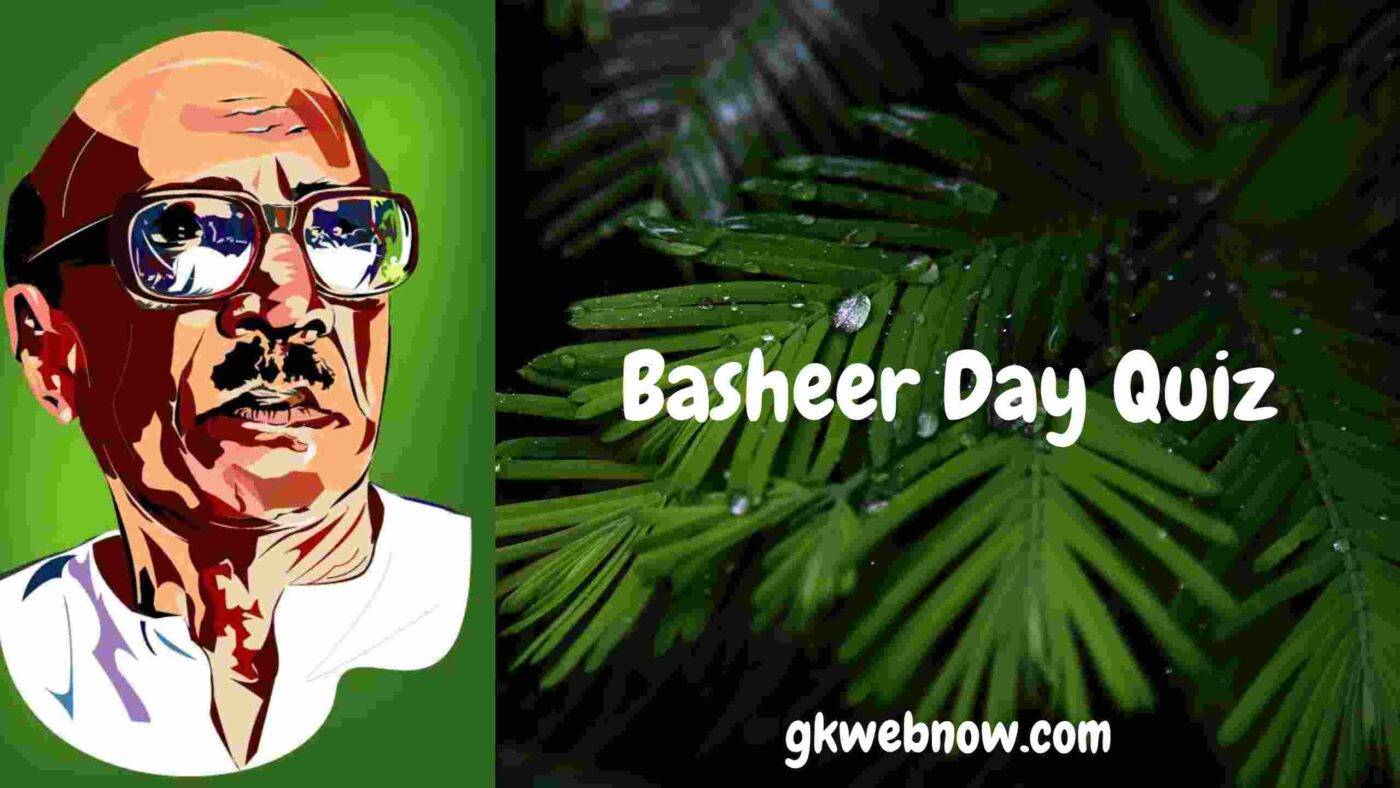 Vaikom Muhammad Basheer was born on January 2, 1908, in the village of Talayolaparambu near Vaikom in Kottayam district, the son of Kai Abdurahman and Kunjathumma, Primary education was at the Malayalam Church in Talayolaparambu and at the Vaikom English School. July 5 is the day of remembrance of Vaikom Muhammad Basheer. Here is a collection of questions related to it.

1. Where was Vaikkom Muhammad Basheer born ?

3. In which district is the place Beypore ?

4. Which is the first novel by Vaikkom Muhammad Basheer ?

5. Which story of Basheer was developed into film as Bhargaveenilayam ?

6. When was Vaikkom Muhammad Basheer died ?

8. Which book is known as the autobiography of Basheer ?

10.  Who wrote the screenplay for the film Bhargaveenilayam ?

11. In which year was Basheer awarded with Padma Sree ?

12. Who directed the film “Mathilukal” ?

14. The novel published after the death of Basheer ?

15.  In which book does Basheer explain hunger on birthday ?

17.  Who directed the documentary ” Basheer The Man” ?

18. In which book can we see the character Mandan Muthappa ?

19. Who directed the film BALYAKAALA SAKHI ?

20. Basheer had published a weekly. what was it?

22.  what is the real name of vaikom muhammed basheer ?

24.  In which district vaikom, talayolaparamb situated ?

26.  In which year basheer got married ?

27.  How was Basheer called by his children and wife ?

28.  Who are the brothers and sisters of basheer ?

29. Which is the first published story of Basheer ?

30.  In which daily was his first story published ?

31. Which is the only Balasahitya Krithi wrote by basheer ?

32.  What is the name of basheer’s bookstall at Ernakulam ?

33.  Who translated his works in english ?

36. In which of these works of Basheer is Mookkan the central character ?

37. What was the name of the house where Basheer lived in Beypore ?

38. Who was the first Malayalee to win the Kendra Sahitya Academy Fellowship ?

39. Which of these works is considered to be Basheer’s masterpiece ?

40. In which writer shared the Vallathol Award with Basheer in 1993 ?

41. Who played the role of Basheer in the film ‘Mathilukal’ ?

Answer – Basheer himself called him Sulthan

43. Which is the most impressed Song for Basheer ?

44. In which struggle did Basheer take part along with Gandhij ?

46. Who is known as ‘sulthan of malayalam literature’ ?

48. When was Pathummayude aadu published ?

51. ‘What a bright brightness’. This phrase is used in which of Basheer’s works ?

53. Which is the work of Basheer that is also known as Women’s Intelligence ?

54. Who is the producer of the film ‘Mathilukal’ ?

55. Which year was ‘In the Shadow of Death’ published ?

56. Which year did Basheer get the Muttathu Varky Award ?